It has been well over 30 years since I proposed that the mast cell is critical to the origin and progression of NF1-associated neurofibromas. I very much expected that a unique, low-risk and highly effective treatment strategy was a logical consequence. [1-3]

The purpose of this web page is to declare that mast cell stabilization is a treatment strategy that could and should be available on a routine basis throughout the world in the year 2015 and beyond. A key issue here is focus on how the mast cell becomes activated. An early prejudice was that the neurofibroma-associated mature mast cell is simply waiting for activation as part of an unavoidable, inexorable process. I have replaced that prejudice with the presumption that there are multiple activation factors, any one of which might be blocked or aborted during treatment. Identifying those factors must be the first step in preventing or preempting their respective roles in mast-cell-related NF1 neurofibroma progression.

1.  The mast cell in terms of histopathology, cell biology and mouse models of NF1. For many decades, pathologists have recognized the presence of mast cells in all three components of the nerve sheath and, thus not surprisingly, in neurofibromas of all types. Then, the advent of mouse models for NF1 documented and extended the role of mast cells in the origin and progression of NF1 neurofibromas. Specifically, mast cells were shown to be necessary, but not sufficient for such neurofibroma development. In addition, more recently, it has been shown that “normal” mast cells could contribute to neurofibroma development. This fact clearly implied that interfering with normal mast cell function – for example, with ketotifen – could interfere with the origin and progression of NF1 neurofibromas. Before, during and since these considerations, I had/have been an ardent advocate for exploiting the role of mast cells in NF1 neurofibroma pathogenesis, and others have corroborated this approach. [1;4-15]

3.  German publication. In 1989, Haustein published a series of three NF1 patients treated with oral ketotifen, all of whom experienced a decrease in neurofibroma-associated symptoms and a decrease in rate of neurofibroma growth. [19]

4.  Surgeon-feedback data. During and after the formal protocols noted above, if a ketotifen-treated patient underwent surgery for debulking or removal of a plexiform neurofibroma, frequently – if not always – the surgeon would contact me to inquire what might have accounted for the remarkable decrease in expected intra-operative hemorrhage. The answer was the patient having been on oral ketotifen for at least ten days prior to the surgery. Neurofibroma surgery intra-operative hemorrhage is a major problem for NF1 and pre-operative mast cell stabilization, and ketotifen realistically addresses this problem. [17;20]

5.  Recent publication. In early 2015, the American Journal of Medical Genetics accepted for publication a report of two NF1 patients who had been treated with oral ketotifen, 2-4 mg per day (depending on age) from infancy or early childhood for 30 and 25 years, respectively. When last seen, the skin of both was strikingly similar: their cutaneous neurofibromas were relatively few, flat and uniformly small (1-4 mm diameter). It was as though the cutaneous neurofibromas had been arrested at a very early stage of development, where they remained. It appeared that early childhood treatment with ketotifen had preempted neurofibroma development beyond the earliest stages. The older patient’s NF1 gene mutation has not previously been associated with absence or arrest of cutaneous neurofibromas. [21]

6.  Ketotifen Self-Determined Treatment Experiences. There are a series of patients who have explored and/or resorted to treatment with ketotifen based on self-determination – or the determination of their parents – in order to realize the benefits of this treatment strategy. The most remarkable consequence has been two-fold: a) the uniformity of the language each person/family used to describe the benefits, including decreased neurofibroma-associated itching, pain and tenderness, a decreased rate of appearance of cutaneous neurofibromas and/or decreases in the rate of growth of plexiform neurofibromas, and a remarkably improved sense of well-being; and, 2) when possible, documentation of these testimonies. Click here for the complete KSDT article.

Photo shows a home shipment of Zaditen®
from Turkey to NF1 patient in Colorado. 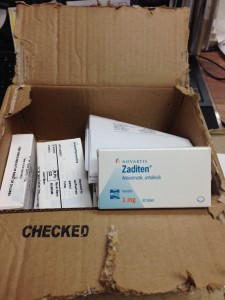 7.  Tranilast effects on neurofibromas in vitro. In 2009, Yamamoto and colleagues reported that another mast cell stabilizer, tranilast, was able to disrupt the growth of human neurofibroma-derived cells (Schwann cells and fibroblasts) cultured in petri dishes. The technical details fit with clinical findings, i.e., that blocking mast cell degranulation compromises neurofibroma growth. “Tranilast significantly suppressed proliferation of the NF1 cells and lowered the levels of TGFβ1, SCF and tryptase. These results suggest that tranilast retards tumor [neurofibroma] proliferation …” Tranilast is very similar to ketotifen in terms of mast cell degranulation effects, and thus I take the results of Yamamoto and co-workers to make ketotifen treatment even more compelling. [22]

9.  Non-neurofibroma relevant data.
a.  Mastocytosis is a relatively common disorder involving the proliferation and accumulation of mast cells in multiple tissues and ketotifen can be very effective in treating this disorder, as are other mast cell stabilizers. We thus expect a positive treatment effect of ketotifen in the mastocytosis-like disorder known as NF1.
b.  Respecting my oft-quoted contention that a neurofibroma is a disruption of wound healing, research showing that ketotifen has a positive effect on the early stages of wound-healing adds to the efficacy of ketotifen in treating neurofibromas, especially in the early stages.
c.  Likewise, as neurofibromas and other NF1 lesions are often characterized as having extensive fibrosis, recent research showing a positive effect of ketotifen on minimizing or reversing fibrosis is noteworthy. Moreover, fibrosis is one of the areas the FDA has approved ketotifen for research purposes in the USA.
d.  The mast cell, with its intimate relation to pain-receptor nerve fibers (C-fibers), has become a useful target for treating pain as a symptom with mast cell stabilizers, for example, in sickle cell crisis. [3;23-28;28;29;29-36]

10.  Global experience regarding versatility, safety and modest expense. The world-wide use of ketotifen for asthma and other disorders in which the mast cell is a major contributor has established its efficacy and safety in the context of its modest, if not minimal expense. (I know of patients who have obtained ketotifen for as little as 15 cents a tablet.) Here, it should be noted – at least parenthetically – that the FDA failed to approve ketotifen on the basis of technical details regarding its efficacy for asthma treatment, not on the basis of concerns about toxicity or adverse effects.