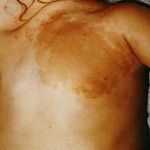 The autosomal dominant human genetic disorder, NF1, is common, affecting about 1 in 3,000 persons. There are dozens of ways a person affected with the NF1 syndrome manifests the disorder, primarily a function of 1) the person’s age and 2) the details of the change in the NF1 gene. The genetic change either a) disrupts the structure of one of the two parental gene copies (μ or “mutation”) or b) results in the total loss of one of those copies (Δ or “deletion”). With increasing age, there is more time for the μ or Δ to become obvious. Ultimately, all NF1 persons show three elements: 1) distinctive dark patches of skin (café-au-lait spots or “CLS”), 2) nerve-associated tissue masses called “neurofibromas” and 3) distinctive small lumps on the iris of the eye, called “Lisch nodules.” When all three elements are present, the diagnosis of NF1 is thereby established. Of these three elements, the neurofibromas are the most likely to cause problems, whether they are present at birth (congenital) or become obvious later, most often near the onset of puberty. These mass lesions, usually considered tumors at some point, are very often a principle cause of the NF1 syndrome’s health compromises: they may be very numerous and/or their respective sizes can interfere with multiple body functions.

Moreover, in at least 10% of cases, selected neurofibromas undergo malignant transformation, the most common cause of NF1-associated death. In addition, about 15% of the time, the NF1 syndrome includes brain tumors – gliomas – with another set of distinctive health problems. Less frequently, other types of tumors may develop in various tissues, such as the gastrointestinal tract (carcinoid, GIST), endocrine tissues (pheochromocytoma), skeleton (juvenile myelomonocytic leukemia) and mammary glands (breast cancer). Another major source of problems is disruption of normal tissue development (dysplasias), especially involving the skeleton (short stature and localized defects of the limbs and/or spinal column) and the vasculature (arteries). Beyond the three “defining” elements of the NF1 syndrome noted above, various types of learning disability are the most common elements of the NF1 syndrome, occuring in 60-70% of NF1 persons. In addition, a significant proportion of NF1 persons have low blood levels of Vitamin D, perhaps related to excessive numbers of mast cells. For a more exhaustive itemization of NF1 syndrome elements – be they features, consequences or complications – the reader can consider articles itemized in the NF1 LINKS section (NF1 Links) of NFormation.

A key issue is the notion of variability. The NF1 syndrome is very, very different from one person to another. The types and magnitude of problems seen from one NF1 person to another is tremendously variable. One cannot predict 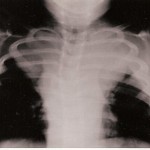 either specific problems or overall severity from one NF1 person to another, even within a given family – or even within a pair of NF1 identical twins. And, of course, this brings up a key element of the NF1 syndrome: heritability. Although one-third of “new cases” of NF1 represent a new mutation (or deletion), without an affected parent, the recurrence risk among the offspring of an affected parent is 50%.

Treatment options as of 2015 are still very limited, with a continued, perhaps anachronistic reliance on surgery to decrease the size or afford removal of neurofibromas and other NF1-associated tumors and/or to influence the dynamics and consequences of the various dysplasias (e.g., scoliosis). One potential treatment approach, “stabilizing” the mast cell component of NF1-asssociated neurofibromas, has yet to be explored fully. To this end, the reader may be interested in the NFormation  articles discussed in the NF1 UPDATES section “Ketotifen Update: Mast cell stabilization as an NF1 neurofibroma treatment strategy” and “Self-Determined Ketotifen Treatment of NF1 Neurofibromatomas“. Additional approaches may also be found in the NFormation  NF1 LINKS section (NF1 Links).